Here's the latest news updates and/or breakthroughs in scientific progress regarding SKYFALL.

This day marks the 15th anniversary of SKYFALL, as well as the 8th year that CFM2 is late for release! Only one more year until the next round number! If we have any cool explosions tonight, we'll be sure to post them for all to see. In other news, our hosting provider of all these years is calling our website "old" and "deprecated," and we are urged to upgrade. This just means to use that we should be hosting this ourselves. We have the hardware, we have the colocation, we have the knowledge, and that knowledgable, colocated, FreeBSD server stays far more up to date anyway. It's a lot easier to stay up to date than to suddenly update after years of no update.

And so, I bring us to the point of this post so far: The 15th anniversary of SKYFALL, this beautiful Noodle Day of 2016, may mark the final edit to the SKYFALLgames.com website as you know it (of course, we will make one more edit if we have any capturerd awesomo explosions to share). Migration efforts will continue; you'll know when it is done because it will suddenly look different. There is no road map for this.

This Noodle Day, we celebrated by taking a SKYFALL Office computer outside, strapping an artillery shell inside, and lighting it off. After the next few dangerous seconds and a very loud noise, this is the results. Note: Nothing is disturbed here - We did not open the computer! 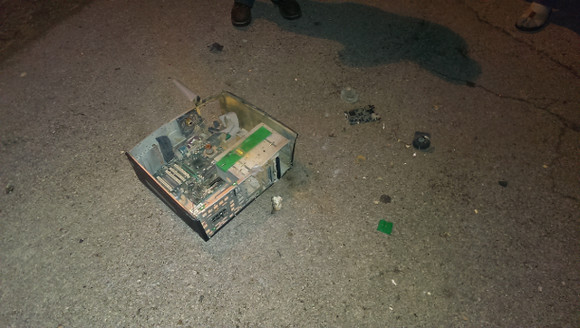 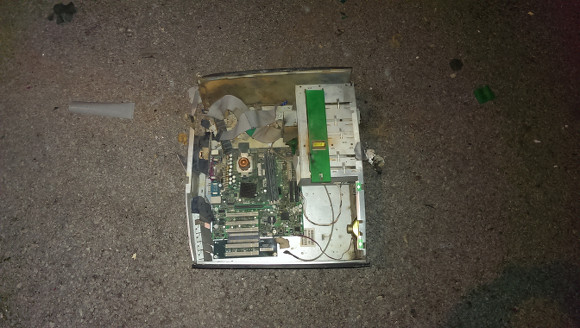 Through many attempts to convert the game engine without entirely rewriting it, we have settled on what we believe to be a happy medium. Through your Nvidia Control Panel in Windows, you can set your machine up to keep aspect ration when scaling, and, unless supported by your monitor, you can set it to use the GPU for scaling. Then, you get all of the SKYFALL gaming goodness without that nasty distortion. ATI graphics card users also have a similar ability via Catalyst, but as we have no ATI-based computers in the office, we can not test, confirm, nor instruct. More info to come as we receive it.

Due to these issues being relieved, progress on CFM2 shall pick up where we left off. Due to budget cuts (that is, we all have real jobs now), progress will be slow. ...But I (Ceiling Fan Man himself) am excited to resume work on this project! We will see CFM2 develop and come to a graceful end! I intend for there to be a CFM3 as well, but we are considering changing programming platforms to make these games playable on all operating systems. If this happens, expect remakes to be released before CFM3.

We also hope to see progress toward completion of Spoogles Bounty Hunter and Captain Noodles: The Most Decent Video Game Ever. The latter will be the tougher project we believe, but both may be difficult due to deprecated programming.

The latest James Bond movie has stolen our name. :(

Rumours have been flying that our project director and administrator, Ceiling Fan Man, may wear pink fuzzy slippers. Let us assure you: This rumour is completely true. Below is a snapshot of the new SKYFALL Office, which has just been moved into as of 2010-06-05, where you can clearly see said slippers. These slippers are quite nice in the new office, which has centralised air conditioning and heating, 10 rooms, and a garage to park in, with tiled floors that can become quite chilly. 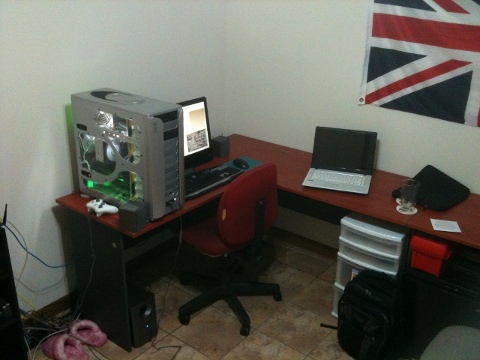 SKYFALLgames.com Tweaks Its Colour Scheme for Its Users

A short while ago, the SKYFALL administration received a formal complaint about how hard our hyperlinks were to read with their pale blue colour. Though we never had problems reading them ourselves, we have to admit that after thinking about it, some monitors could really have issues with our selection of colour. In honour of this complaint, all SKYFALL links have received a slightly altered blue colour that stands out against the background very clearly. We apologize for the past couple years of inconvenience.

The majority of bugs in Ceiling Fan Man II: The Man of Frozen Time have be quashed, so the production is again at full force. Well, ¾-force is more accurate. Storyline issues are still abound, but much progress has been made in other areas, such as a revamped (And now useful!) intro story, and the western continent has been added to the overworld. This continent, however, will remain unavailable in Beta demo releases. Expect an updated demo in the near future, with bug fixes and graphics updates, among other minor changes.

The Forums, SKYFALL Has Moved! ...Again!

Sorry everyone, but the SKYFALL Forums have moved yet again. Please return to using the old URL (forums.skyfallgames.com) from now on... Again. The reason for the initial change was to keep a backup of the forums active and ready to go in case of a failure. We initially decided to use a new URL in an attempt to combat spam bots, but this proved unsuccessful. We have reverted to using a normal forum URL to make it easier to remember. Plus, let's face it, "skyboard" is just a lame name for a subdomain.

The Forums, SKYFALL Has Moved!

The URL for The Forums, SKYFALL has been changed. If you have the old URL saved in your browser (via bookmark, favourites, or in the address bar) as forums.skyfallgames.com, you would be wise to change it. While it will appear to still function (At present time), those forums are no longer in use. Please use skyboard.skyfallgames.com from now.

Noodle Day 2009 has come and gone, and Day of Reckoning II: Shattered Peace was completed on time (As in, before midnight)! However, SKYFALLgames.com was experiencing server issues due to heavy loads on bandwidth, so online publishing is a little bit behind. Nonetheless, DoR2 is here now! Check it out and download it at the Video Games page.

Noodle Day 2009 is here, but Day of Reckoning II is not! SKYFALL programmers are feverishly coding (Imagine 2 men in recliners with some spiked lemonade and laptops) to release this title before the end of the day...
Stay safe; celebrate Noodle Day responsibly!

Day of Reckoning II Slated for Release on Noodle Day

The long-awaited Day of Reckoning II: Shattered Peace is scheduled to be released on Noodle Day, 2009. Details about this title shall remain undisclosed, just like we handled the first one, forever. You will just have to wait for it, then play it. However, one screenshot shall be posted in the Video Games page, available immediately.

Just posting an honorable mention up for Major Mayonaise, whom really does not do anything. In seriousness (I know, it's not very SKYFALLian of us), although he is our enemy in the SKYFALL universe, he is fighting for our country in Iraq. Thank you Major Mayonaise! And yes, I am paying my taxes.

Production has grinded to a halt on Ceiling Fan Man II: The Man of Frozen Time due to glitches being discovered for Windows Vista users. While we've never recommended using Vista, the number of Vista users is high enough that this has been deemed a serious issue. With any luck, the cause will be discovered and production will start rolling again shortly.

In Creek Jump 2007, the A-Dum jumps over a dangerous gap - A creek. Snow Biff is a preview for the SKYFALL movie of the same title, which is never coming to theaters. Both of these videos are "rated" G. Download them now from the Movies/Videos page!

A new SKYFALL video is now available: The Diddly Squat.

SKYFALL has just released a Windows application. It's a web browser that we plan to continually upgrade, at least until further notice. Tabbed browsing is not promised in the future. We call it: Project SkyNet. (Notice from the future: Source code was lost in a hard drive failure!)

Happy Noodle Day! This is a great day to play some NoodleBall, the official SKYFALL sport and traditional celebratory activity of Noodle Day!

We've finally solved our problem with download links returning 404 errors, namely with Ceiling Fan Man: The Best Video Game Ever. Download links should function with near 100% reliability from now on.

The Website, SKYFALL is finally complete this morning at about 0300 hours. There is lots of new content available now in the new Video Games section, including, but not limited to, detailed information pages about our cornerstone games, Ceiling Fan Man: The Best Video Game Ever and Ceiling Fan Man II: The Man of Frozen Time.

This title will be downloadable on the next website update, which should be after the site is complete (Or at least a lot closer to it than it is now). Sweet action.

You can buy cake with money... People do that.

Every SKYFALL product to date packed onto one convenient disc, and including some exclusive content unavailable anywhere else. Obtainable through any SKYFALL dealer.   Also....

There will also be a new collection disc every month.

As it turns out, hydrogen gas is extremely explosive and sensitive to flame. Especially when in a mostly sealed container. SKYFALL recommends not trying this at home, like Ceiling Fan Man did.

The Forums, SKYFALL are now online! Refer to the links above, or right here, or use the URL "forums.skyfallgames.com" to get there. You must create an account with a valid e-mail address there to post.