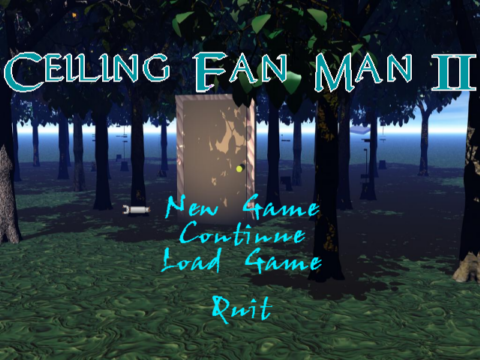 In a country made mostly-peaceful by the fall of Major Mayonaise by Ceiling Fan Man and Captain Noodles 3 years ago, a trans-reality gateway has torn it's way into Noodle Land, connecting our reality to that of a cold and shadowy one. Oriental Noodles and Window Fan Man invade Noodle Land with their army of Waffle People and a new virus that's wiping up Noodle Land's military and mercenary forces alike. Ceiling Fan Man picks up the legendary Magic Muffler once again, to fight solo or alongside Captain Noodles, Spoogles, and more to close the gate and restore the mostly-peacefulness to Noodle Land. Hey, it can't be too quiet - They'd be out of a job!

Ceiling Fan Man II: The Man of Frozen Time is a project in the making. The game engine is complete and has turned out nicely, if you ask us, so now all we have to do is make the content.

Ceiling Fan Man II features non-linear gameplay! This means that you don't follow a very clear-cut path through the game. Instead, you'll have to find your way to the next part of the game. The new in-game time feature will also play a role in when you can do certain things. CFM2 also boasts an arsenal of 10 different and unique weapons, ranging from a BB gun to a prototype multi-missile launcher, and of course, the Magic Muffler. You can use all of these new weapons against the new cutting-edge AI formulated for CFM2. CFM2 also has a revolutionary* inventory system that allows you to save those Flintstone's Vitamins until you really need them. Using some items, however, will start a cooldown timer on all similar items, so use them wisely. One last feature worthy of being listed in this horrible run-on paragraph is the game's lighting system. Unlike Ceiling Fan Man: The Best Video Game Ever, when you enter a cave or such, it will actually be dark. Ceiling Fan Man is equipped with a flashlight, or in some cases nightvision goggles, which run on batteries. You should keep a stock of batteries so you don't become left in the dark.

Hover mouse pointer over a screenshot for a description.

Note: If you experience poor performance, it might be worth a try to reboot. This has helped in many cases.